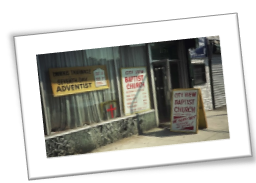 The City View Baptist Church was started in 1984 by Matthew Recker, the church was made up of predominantly Caribbean Immigrants. After a period of about five years Pastor Recker resigned to start another church. He was replaced with Pastor Hoover who remained for a short period before accepting a call to the mission field. Pastors Chambers and Magnuson were brief interim pastors. During that period the small group of believers purchased a building for $500,000 three doors away from its original building with a mortgage held by the owner for close to $5,000 per month.

The church went through a period of hardships spiritually as well as financially until the mid-nineties. During that time the church extended a call to the eldership to one of its own men, Pastor Bryan Taitt, who served in the deaconate.

City View moved in the direction of reformation by adopting the 1689 confession of faith, there was a series of bible conferences held with invited pastors. Pastor Achille Blaize of the UK and Belton Brevard from Grace Reformed Baptist Church Newark NJ, were instruments of help in our early process. The church continued to invite several reformed pastors to sustained reformed distinctives and growth among the brethren.

During this period God opened a door in Zimbabwe, Africa where the church is still ministering today.

Today our membership is about 60 individuals, we have five men serving in the deaconate and a full-time elder set apart to labor in word and doctrine. 35 years later, the Lord has kept us faithful to the call to be distinct in our community. Our aim is to promote the person and work of Jesus Christ by preaching, biblical worship and holy living. The Lord in his mercy has enabled us to complete payments on our building where we can extend the gospel beyond our four walls.